Crow in The story of Adam A.S and his Sons Habeel & Qabeel

The art of storytelling, Creativity, Moral lessons and wonderful pieces of information 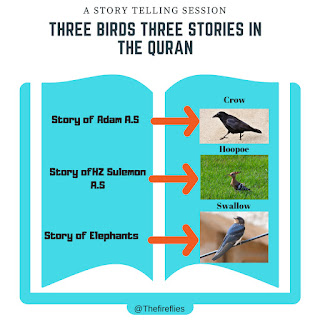 Our first story is about First Khalifa(Prophet of Allah SWT )Adam and His Sons. The bird mentioned in our first story is A CROW. This story is revealed in Surat Almeida in Quran. The facts of the story of Adam are Given in these two pictures.
With some facts of the story we talked about the reason why Adam was sent to this world and what Allah has advised them. Like them we all are bounded with some forbidden and shytan is our enemy. If we follow him, he will mislead us and we will occur sins like the sons of Adam A.S.(We have this finger printed forbidden tree for this purpose.) 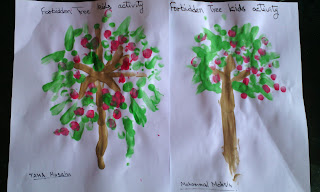 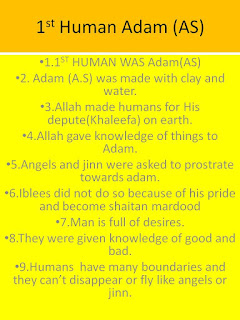 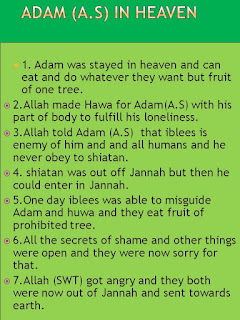 The story is about two brothers. One brother was loyal and honest who loves His brother, father, and Allah, but the other was misguided by shaitan and killed His Own brother in His jealousy.
In this session, our focus and purpose are polishing the creativity of Muslim children and adding some pieces of information about nature with a complete reference of the Quran. So that children take more interest in reading and understanding the Holy Book Quran Kareem and do Tafakurr.

In my last article of three birds and three stories of the Quran, I explained why I decided to work on the animals/Insects and birds. Click the link to read our beautiful journey of that project).
The story is familiar to the kids as they are listening to it from the lap. So I’m not going to add the story in this article. Here is the link to this story in English or Urdu to help you reach to the story. YouTube also has videos of these stories in English/Urdu. And many of us who read the Quran and Tafseer already know the story.
We covered this story in These Steps.

Before starting to telling stories you should have to prepare your self to
We were lucky enough that we found a nest of a crew downstairs. That was close to the roof so we used a ladder to capture a close view of that nest. Honestly speaking the photograph is not much pretty, but I’m proud to uncover it as that was made by my little kids. We don’t have any pic of crow not of eggs, but its ok as kids are familiar enough with crow. 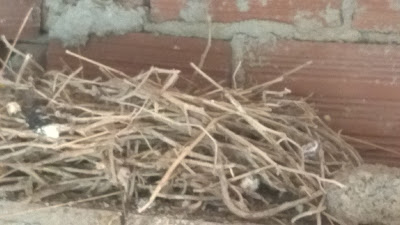 Then we got these interesting facts about crow after watching the videos and also from this story. 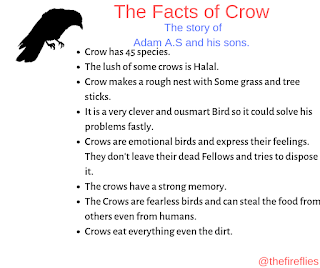 These facts unveil the truth of crow. For me, the new thing was that crow is Halal and Muslims could eat.

5.Crafts of the story.

In the end, we made the nests of crows. We got three kinds of nests. to get all the pictures to visit my Pinterest profile. Every child participated in this session excitedly. As it was again some fieldwork. They went outside to catch sticks and husk to make a nest. The video of making a nest is down.

6.  The Benefits and Importance :-

The benefits of birds as well as Crow and Verses about birds in the Quran..-
Like other animals, insects and birds Crows are also created for some benefits of all human kinds. 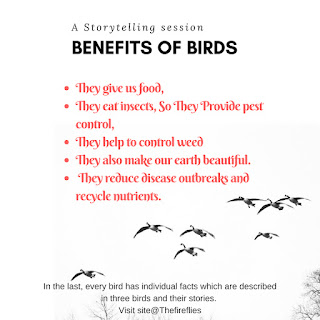 Here down we will have some clear benefits for the Crow to tell Muslim children that crow is not a useless bird. And what we could get from them.

Follow these (verses)Ayats for reference of benefits and facts of animals, birds, and Insects.

7.The lesson and prayer of Adam.

Did you enjoy this story with Us?
Leave your thought about this wonderful experience.
More articles.
The story about a Plant for children.

Teach about Islam with Islamic activities.
Books recommended by me.