Skip to content
Posted on November 15, 2019June 29, 2020
Dear kids
our today’s Hadith is about Grudge (irritate)
Dear kids grudge is also a bad habit like anger and jealousy, I hope that you tried to control it.
In Sha Allah today we will learn about grudge and then we will try to get rid of it also.
Let’s read the Hadith first.
Our prophet (PBHU) said 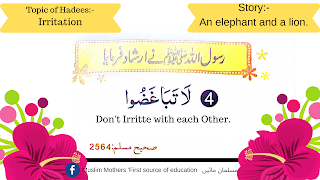 Dear kids the story related to today’s Hadith is about
An elephant and a lion.
Dear kids grudge is very bad illness, which can make a loss to us, grudge is this that all the time we feel hate and jealousy in our heart for someone but with all these we also try to do something bad for them, sometimes it happens that we do something bad for others but caught himself in it. By doing so we waste our time and energy. As it happened with an elephant in today’s story.
Dear kids
Once upon a time there was an elephant in a forest(jungle) and a lion.
The lion was the emperor of the forest, the elephant had a grudge with the lion because the lion gave orders to all other animals of the forest, the elephant does not like it. He wanted the lion to get out of the forest but he could not do so, as the lion was emperor of the forest and also powerful.
One day the elephant thought that like this I could not get rid of the lion but I can do such a trick that the lion gets trapped in it.
He started to dig a hole in the way of the lion from where he used to walk around daily so that the lion fell down in it and could not come out.
The elephant digs a big hole with his long beak and put narrow sticks of wood and leaves on the top of the hole so that the lion can not see the hole. After it, the elephant sat away on one side to wait for the lion to come and fell into the hole.
But dear kids that day the lion went away from the forest for some work so he did not came in this way, And then lion did not come on that way for some days..
The elephant gets disappointed. But he was happy that the lion was not there. A few days later the elephant forgot the hole himself..
Dear kids one day the elephant passes from this way and fell down into the hole. Now he was crying loudly. Help me help me
But, No animal could help a big elephant to come out. Now He was regret that if I did not dig it for the lion I would not be trapped now, but there was no use to cry now.
Then the lion came there. He saw that elephant is in a big problem, He advised to the animals that all should throw the mud in to it and fill the hole with mud, So that when this hole will be filled completely the elephant will come out.
Dear kids all the animals started to do the same and then the elephant found his way to come out.
Dear kids as you see that due to grudge the elephant trapped into such a big tragedy.
So we also try not to have a grudge with any friend or neighbor or brother or sister, and also never try to harm anyone.
Dear kids Allah teaches us to love all humans.
Follow me
(Visited 30 times, 1 visits today)