Making an origami phone and adding a brief description (essay) is one of the unique and cool homeschool activities my kid had done.

This is an age of It and Phones/tabs/computers, PST, and other devices that had already replaced many other devices. Outdoor games are getting ignored and sitting inside is muting many interesting hobbies day by day.
The new generation(young children) is also under the deep influence of all these devices.
But!
What is the Role of homeschool activities to introduce a new generation with new technology as well as the right use of them?

Parents are not in the condition of saying “No” to devices and technology.As
Kids are watching to moms and Fathers they are spending more time scrolling iPhone!
So! How A Good homeschooling is possible with good parenting Guide? Today we need to get more advanced and a step ahead to accept and molded new technology into rapid benefits. So I never push them to stop using these things. Yes, we have some strict rules and schedules to use it.
That’s why my elder 7+ yrs boy and youngers are also dreaming to grow big and waiting for possible reach to the iPhone.(I’m very strict with them to understand that personal iPhone allowed just to adults, of course, they have a desktop). I would really like them to get mine for a short time. And in that interval using tricks I always motivate them to do creative things and learn useful things (Read my article about Best ideas to use iPhones could get here)With the iPhones.
Now what the older one did? He made this origami iPhone using Paper and colors.
I was in a condition of a shock to see him under that much influenced by iPhones. I was collecting words to explain why he could not get an iPhone at this age. But the next moment I praised his work. And discussed how he made this. He told me that ‘this is a Nokia phone. And I had made another one for younger brother’. And those both were flipping phone. 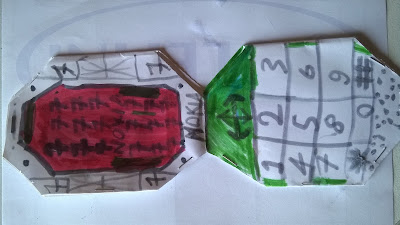 So I can say proudly, home school activities provided him a big space to learn and grow. And using self-creativity he had made done a super job and his observation and memory were super high. No one around me is using a Nokia phone, but he watched that somewhere and using memory he had made a perfect phone with all the keys.

The phone was pretty good. He was glad and I too. But this did not end. We were going to add a new home school activity with this.
I asked him to write down the features(essay) of his Phone.
And this was a great experience. His involvement in writing was pretty more than any other thing. He was writing and I was analyzing myself how much knowledge I can transform. Here is another picture of what he had written. (Ignore the writing as it was then not written to show off and also creativity doesn’t demand beauty)

Besides, iPhone what other products or toys kids can make and write for them are….. Remote control cars,(Younger one had made pic is down) Calculators, Tabelphones, computers, Coffee maker toy, washing machine toy, Oven toy, radio, speakers, exercise machines, Aeroplan or rocket toys.

What do you think iPhones have a bad or good influence on kids? And What should be the Parent’s role to educate them about the benefits of other devices.? Share with us if you have more ideas about the activities that could be done like this.
My comment box is waiting for your views.
More engineering homeschool activities are going to publish soon. If you want to get them don’t forget to subscribe.
Hire me for online tuition or free parenting guide.
Here are some other must-read links about parenting and homeschooling.
For more engineering Projects go House crafts and Bridge crafts

13 Replies to “Best ever home school activity. Teach kids to do Research, crafts it and write about products. And then give presentation.”