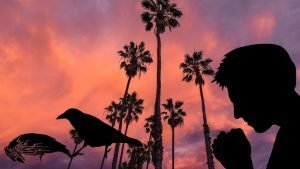 In Islam to get angry is haraam and anger comes from the devil.

The devil makes us angry person so that we do bad things which Allah (SWT) does not like and we can not enter into Jannah.

Dear kids today I will tell u a story of anger which is about the sons of Hazrat Adam A.S

They lived with love in childhood, as they grew up they appeared opposite personalities.

Habeel loved to sacrifice in the way of Allah. He lived his life in a kind way by nature.

On the other hand, Qabeel was lazy, jealous and discontent. He never spared the time to thank Allah .he always blamed others but not himself.

As the devil was making him hate his brother and other people. Qabeel thought that his father Hazrat Adam (A.S) do not love him, and love Habeel more so Qabeel get jealousy from Habeel.

Once both brothers were doing work on the edge of large stone, suddenly Qabeel slipped from the stone, Habeel holds him before felling down and saved the life of Qabeel.

After this incident, Qabeel’ s hate and anger for Habeel decrease to some extent.

But soon the devil again started to make him angry and jealous of his brother, now Qabeel becomes angrier and he started to demand unfair things.

As Habeel was a caretaker of animals so he sacrificed a very beautiful, healthy cow.

Qabeel was a farmer, he took rotten crops and fruits in a basket to sacrifice,

It was Allah’s decision but Qabeel did not accept it and his hate for Habeel increases more, he started to tease him more and one day he asked his father I will marry the girl with whom the Habeel is going to get married, his father refused and said ‘as she is your sister you can not marry her’ .

Dear kids it was the first murder of any human on earth, so Qabeel did not know where to hide his brother, then he saw a crow was digging another crow into the mud.

So he also buried his brother into the mud.

After it, Qabeel was regret for it and thought that this crow is better than me. He loves his brother more and knows how to treat him after death, but now it was useless to regret, he could not become Khalifa nor get married that girl.

Dear kids May we lose our loved ones when we get angry like Qabeel.

So let’s make a promise that we will act upon today’s Hadith of the prophet(PBUH), do not get angry, 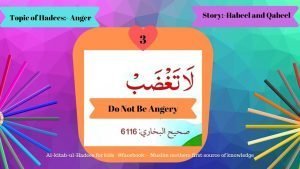 
Prophet (PBUH) said that recite ‘Ta’awwuz’ and perform wudu when we get angry so that we can not follow the path of the devil.

If you want to Print this story you can comment down. The PDF will be sent to you.

This story is written for our 30 short hadith with stories course for kids. You can join this course. We offer online classes in a very reasonable fee.

4 Replies to “Story no 3| Hadith no 3|Story of Jealousy| Adams sons Habeel and Qabeel for Muslim children.”