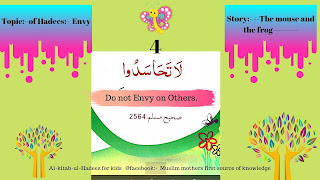 “ do not be jealous of one another “
Dear kids as you can understand from the topic that this Hadith is about jealousy.
It is not a good act and a very bad feeling so we should leave it.
Dear kids jealousy is the name of this thing,
that if we see something good in others, we do not get happy to see it ,
but we wish that this thing may lose by them.
Due to this kind of jealous nature a Person can not be happy in any situation,  even for the things whatever he has. Such a person always feel jealousy inside them
Dear kids to understand this feeling well, let’s hear a story of a hen, a dog, and a horse.
Once upon a time, there was a hen in a house of a man .it’s name was KATOO BEGUM.
People of the house took good care of her, they made a separate room for her, they feed her in the morning and evening and also give fresh water daily. All the day katoo begum walked around in the house happily, she laid one egg daily also.
One day she got small kids from the eggs, now katoo begum feels more proud by spreading her wings and walked around in the house because all the people of the house were taking more care of her and her kids. she got their full attention.
After a few days, the owner of the house brought a dog with him, his name was PAPU.
The man tied the papu near to the gate and also prepared a small room for him.
The people of the house started to take care of papu also, they feed him and give water also on time, but it was not liked by katoo begum, she started to get jealous of the papu.
She thought that before, I was alone in the house to walk around here and there, and got the full attention of all,
Now this Papu has come, but she could not do anything. She started to get jealous all day and sat on one side unhappy. After few days when the owner came back house at night, he had a horse with him.the name of the horse was Chandu.it was a beautiful horse, but katoo begum did not like the chandu as well.
Now the owner of the house started to bring food for the chandu also, he cleaned the chandu in the morning tied the cart with the chandu and gone for work.
When he comes back in the evening, again he cleaned the chandu and takes him outside to be relaxed on the sand.
Katoo begum observed it and thought that all the attention of the owner is for the chandu, he spends more time with chandu.katoo begum is now much jealous from the chandu, she thought that is this papu was not enough, as they bring the chandu also .she was spending more time quite, and does not come outside from the room . The people of the house was taking care as usual as they were doing before, but katoo begum does not like it and wished that may both of them go away from the house.
One day all the people of the house went outside, only katoo begum and papu were left at home. Katoo begum was giving food to her kids, kids were eating and running here and there in the house. Katoo begum did not know that a cat sitting on the wall was thinking to eat the kids. Suddenly the cat jumped from the wall and was about to snatch the chickens ,at the same time the papu who was watching all this, started to bark at once and run towards the cat. The cat ran away by fear of papu. Katoo begum gathered all her chiks and took them inside her room.she was scared too much, she thought that if today this papu would not be here what would happen with us? The cat would eat all my chicks. now when she sees papu she admits that this papu is very useful she admired the papu.Next day when katoo begum came out from her room she had less hate and jealousy in her heart for papu, but still, she feels that chandu is useless she thinks that the owner takes him outside the whole day, not me.
Dear kids one days chandu became very ill. The owner could not ride the cart by chandu ,for many days he could not earn money. He had short of money now, he did not buy food for chandu, katoo begum and papu. He was very sad and thought that I would sell out the chickss of katoo begum, now katoo begum became very sad she was worried for chandu’s illness, she started to pray for chandu. Her prayer accepted by Allah and chandu recovered his health and katoo begum’s chikcks were safe now. The owner again started to take chandu to ride the cart, at night he brought food for katoo begum and her kids.
Now katoo begum understand it very well that in this world nothing is useless everything has its own value, if I give one egg daily to the owner this chandu also work hard to earn money and papu provide safety, she got rid of jealousy she made a promise with her that now I will not be jealous of anyone
Dear kids we also should not be jealous and keep our hearts clean …Please write this hadith into your Al-Kitab-ul-Hadith and remmber it well. Don’t forget to share hadith with your family and friends. Till the next hadith with beautiful story Allah hafiz Aslam-o-Alikum.
Follow me
(Visited 262 times, 1 visits today)