Welcome to our Hadith Classes Online

We will provide you free 30-short Hadiths course with the introduction, stories, videos tips to teach, and worksheets 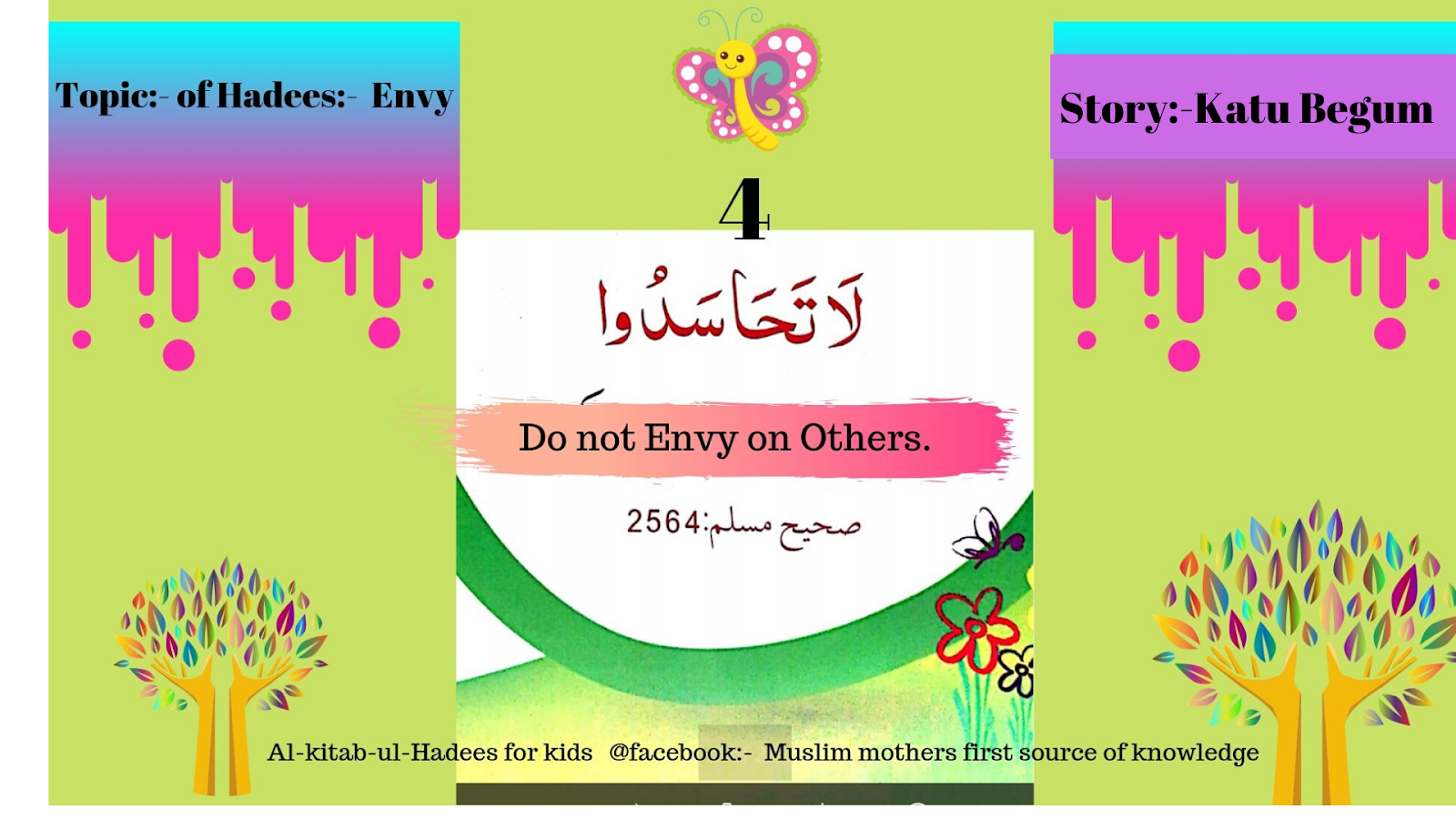 It means if we see something good in others, we do not get happy to see it,

Dear kids, to understand this feeling well, let’s hear a story of a hen, a dog, and a horse.

A story about jealousy | Kato Beghum

Once upon a time, there was a hen in the house of a man. Its name was KATOO BEGUM.

The people of that house took very good care of her, they made her a separate room, fed her in the morning and evening, and also gave her fresh water daily. All day Katoo begum walked around the house happily, where she laid one egg daily.

One day, her eggs hatched and she had little chicks of her own. Katoo begum started to feel more proud walking around the house with her wings spread out. Since the people of the house took such good care of her and her kids, she got their full attention.

After a few days, the owner of the house brought a dog with him, who was called PAPU.

The man tied the Papu near the gate and also prepared a small room for him.

The people of the house started to take care of Papu also, they fed him and gave him water on time, but Katoo begum did not like it. She started to get jealous of Papu.

She thought that since she was the only pet in the house earlier, she could walk around the house carefree and used to get the full attention of the household.

Now that Papu had come, she could not do much. She started to get jealous all day and sat on one side in an unhappy mood. After a few days when the owner came back home at night, he had a horse with him. The name of the horse was Chandu. It was a beautiful horse, but Katoo begum did not like Chandu either.

Now the owner of the house started to bring food for Chandu as well. He cleaned Chandu in the morning, tied him with the cart, and went to work.

When he came back in the evening, again he cleaned the Chandu and took him outside to make him relax on the sand.

Katoo begum observed this and felt that all of the owner’s attention was diverted toward Chandu. He spent more time with chandu. Katoo begum was now even more jealous of chandu than she had been of Papu. She felt as if papu was not enough, that they had to bring chandu as well.

She started to stay quieter and kept herself in her room mostly. The people of the house were taking care of her as usual as they were doing before, but Katoo begum did not like it and wished that both of them would go away from the house.

One day, all the people in the house went outside. Only Katoo begum and Papu were at home. Katoo begum was giving food to her chicks and her chicks were eating and running around freely here and there in the house. Katoo begum did not know that a cat was sitting on the wall preying on her chicks. Suddenly the cat jumped from the wall and was just about to pounce at the chicks, when Papu, who was watching all this from a distance, started to bark at once and ran towards the cat.

The cat ran away in fright. Katoo begum gathered all her chicks and took them to her room. She was too scared to stay out. She kept thinking about what would have happened if Papu had not been there. The cat would have eaten all of her chicks! Afterward, whenever she saw Papu, she used to admire him thinking how useful it was to have him around.

The next day, when Katoo begum came out of her room she had less hate and jealousy in her heart for Papu, but still, she felt that Chandu was useless. It still bothered her that her owner took Chandu out the whole day but not her.

Dear kids, one-day Chandu became very ill. Due to that, the owner could not take the cart to work for many days and thus could not earn money.

Since he was short of money now, he could not buy food for Chandu, Katoo begum, or papu. He became very sad and thought of selling the chicks to get money. Katoo begum became very sad at the thought of losing her kids. She realized Chandu’s importance and started to pray for his recovery so that her kids would be spared.

Her prayers were accepted by Allah and Chandu recovered. Katoo begum’s kids were safe now. The owner started to take chandu to work again and started to bring food for Katoo begum and her kids.

Now Katoo begum realized very well that in this world nothing is useless and that everything has its own value. If she gave one egg daily to the owner, Chandu also worked hard to help the owner to earn money and Papu provided safety. She got rid of her ill feelings of jealousy and made a promise to herself that she would not be jealous of anyone.

Video of the Story

Worksheet for this Hadith and story.

This is a short course of hadith and stories from My 30 short hadith with stories course. My hadith course is very much liked and appreciated by parents and students. Online group classes are available online for all time zones. Recommended age for the class Hadith for kids is 7+. These classes are available in English and Urdu. If you want to enroll your child in our classes contact us via.

Other courses we have

If you want to start this course with me then leave a comment, Email me or enroll your child here.

Download your free copy of 30 short Hadith book pdf in Urdu/Eng from the Posts tab.